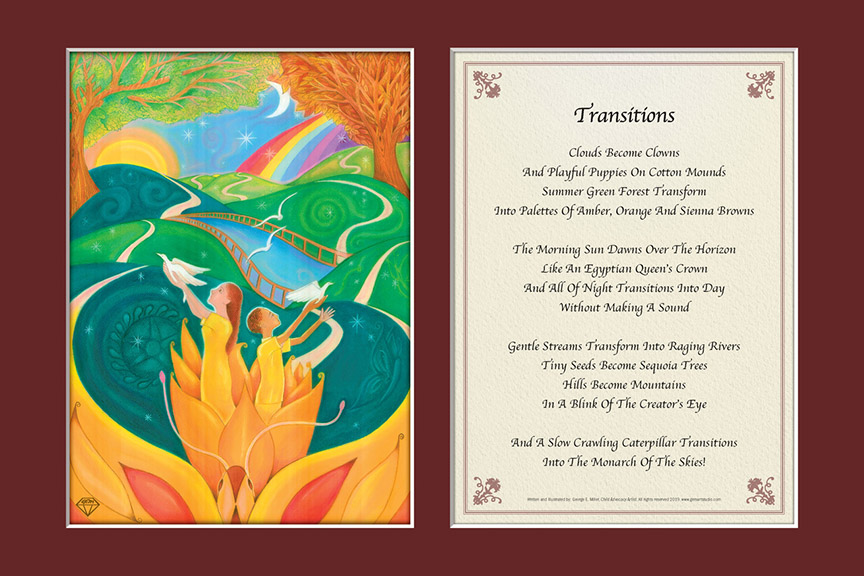 No items found.
Product is not available in this quantity.

This product is out of stock.
Product is not available in this quantity.

Child Advocacy Artist George E. Miller created “Transitions” for the Florida DCDT’s Visions Conference in 2015. The image is an array of symbols starting with the large Monarch Butterfly that surrounds the front of the picture. The butterfly is the universal symbol for life’s transformation. If only man could accept transition as gracefully as the caterpillar that transforms their entire being into a butterfly! The symbol in the grass is “Sesa Wo Suban” meaning "Change or transform your character" it is the West African Adinkra symbol for “Life Transformation”. This symbol combines two separate Adinkra symbols, the “Morning Star” which means a new start to the day, placed inside the “Wheel”, representing rotation or independent movement. Mr. Miller’s artwork illustrates the trees as they transition from Spring to Fall and the Night as it transitions into Day. The roads represent the many paths we will take as our lives bring about transitions; the bridge symbolizes our movement from one side to the other while the doves symbolize the freedom that inevitably will come with our transition.